The match between India and Pakistan was played on 28 August.

In this match, India defeated Pakistan by 5 wickets.

New Delhi. It has been only a few days that the dispute between Urvashi Rautela and Rishabh Pant on social media was pacified. There was a heated exchange between the two regarding Urvashi’s interview. Both made fun of each other through social media, but just a few days after this matter, Urvashi Rautela was seen in the stadium during the match between India and Pakistan in the Asia Cup 2022. Urvashi was seen supporting Team India in the match played between India and Pakistan at the Dubai Stadium. However, Rishabh Pant was not a part of the playing XI in this match. But the fans did not let go of this opportunity and shared the memes fiercely.

Rishabh Pant was dropped from the Indian team in the first match of the Asia Cup 2022 against Pakistan. In such a situation, he managed to trend on Twitter. A picture of his smile is going viral on social media. Fans are making memes fiercely by mixing this picture with the pictures of Urvashi being in the stadium. Though the two situations were unrelated, those who witnessed Pant and Rautela’s social media fight in recent times couldn’t stop themselves from getting involved.

Along with this, the fans have also shared the screenshot of Urvashi Rautela’s Instagram, in which she is saying that she does not like cricket, so she does not know many cricketers. Fans are also trolling Urvashi fiercely. 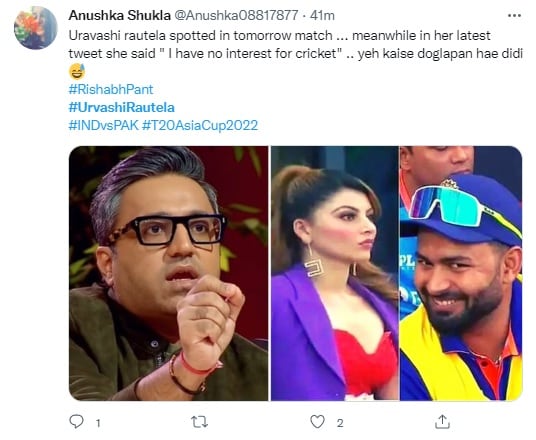 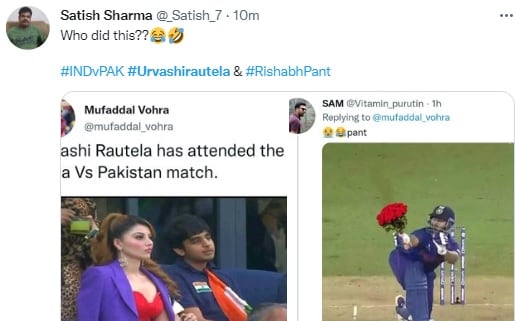 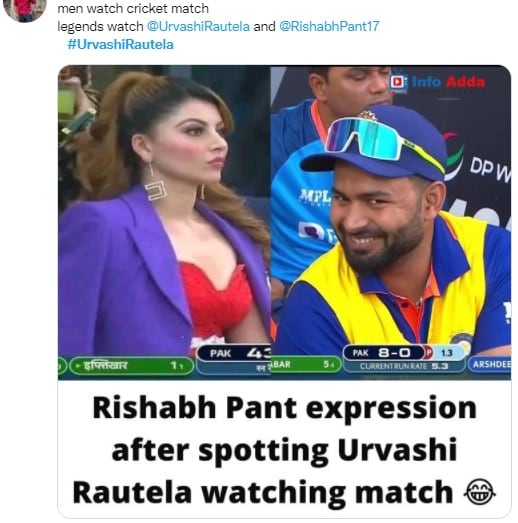 Let us inform that some time ago Urvashi made a controversial statement, after which Rishabh Pant targeted the actress on Instagram. In this interview, Urvashi had said, “I was shooting in Varanasi, from there I had a show in New Delhi, then I had a flight to Delhi from there. I was shooting all day in New Delhi and after about 10 hours of shooting when I went back I had to get ready and you know girls take a lot of time to get ready. Mr. RP came, he sat in the lobby and waited for me, and he wanted to meet me. I was so tired, I fell asleep and I didn’t realize that I had received so many calls.”

She further said, “So when I woke up I saw 16-17 missed calls and then I felt very bad that someone was waiting for me and I did not go. However, a lot of girls don’t care to make someone wait. But I felt bad, so I told him that when you come to Mumbai, see you.” He said, “Come to Mumbai and met, and when we came out Papps and everyone else was there. It is very important to give respect to others, but I realized that the media completely spoils something that is about to develop.
IND vs PAK: Indian team’s victory rocked social media, veterans including Sachin-Laxman congratulated in a special way

As soon as the interview went viral, Rishabh wrote on Instagram, “It’s funny how people lie in interviews for their low popularity and headlines. It is sad how some people are so thirsty for fame and name. May God bless them “Chaschhodho behen #Jhutkibhilimithotihai.” However, he later deleted this post.

India overturned in the last 12 balls, Hardik said – more pressure was on Nawaz than me

After this post of Rishabh Pant, Urvashi wrote on her Instagram, “Chhotu Bhaiya should play bat ball… However, after this Rishabh Pant did not post any, but Urvashi did another post a few days ago, which was believed to be a target on Rishabh Pant. Urvashi posted a picture of herself and captioned it, “I have saved your reputation by not telling my side story.”