Carrot is such a vegetable that can be eaten raw, as well as it can also be used to make vegetables. Therefore carrot is double in quality. Its consumption keeps the brain healthy, so it also helps in cleaning the blood. Carrots are also beneficial for the eyes as they are rich in vitamin A. In Ayurveda also it is considered beneficial for the body. The history of this virtuous vegetable is magnificent.

The history of carrots has been wild. Thousands of years ago the color of carrots was not orange. Then its color used to be yellow, purple or white. When it turned orange, its properties also increased and the practice of its cultivation also increased rapidly. There are different ideologies regarding the origin of carrot. One clearly says that the center of origin of carrot is the Central Asiatic Center, which includes Iran, Afghanistan, Tajikistan and Uzbekistan besides Northwest India. The botanists of India also say that the original origin of carrot is the hills of Punjab and Kashmir. Where in some areas even today its wild breeds are grown.

Carrots were used as medicine

One theory says that its second center of origin may be around the Mediterranean region, which also includes North Africa and Europe. It is also being said that carrot was used in the Asia region by 1000 BC, but then it was in wild form and it was used as medicine, when its color was not orange. It was used in this form for years and later in the 10th century it became orange in color and it was also used for food. According to the story of the carrot, it reached Spain in the eighth century.

There is also a view that the original origin of carrot is the hills of Punjab and Kashmir. (Image-Canva)

The first modern carrots were grown by the Afghans in the 10th century. After that in the 14th century, the Chinese started growing carrots. Europeans brought carrots with them to America in the 17th century, and carrots began to grow in Japan in the 18th century.

Also read: The use of ‘fennel’ was used to reduce the effect of snake, scorpion venom, there are many interesting things related to this Indian spice

The history of carrot in India is very old. The properties of carrot (Grijanaka) have been defined in the ancient Ayurvedic text ‘Charakasamhita’. It has been said that it quenches Vata and Kapha, but those who have Pitta disease should not consume it. In the book it is also described as pungent and sweaty, which means that this information is being given about wild carrot. Like there are many texts related to the Samhita, in the same way about 20 Nighantu have been written in ancient India to give information about plants and plants, in one of these Raj Nighantu, carrot is sweet, interesting, relieves flatulence or acidity, In wormwood extract, it is said to relieve bile and thirst from burning-pain. In ancient India, about 20 Nighantu have been written to give information about plants and plants. (Image-Canva)

Carrot gives relief in many diseases

According to modern research, apart from iron, sodium, copper, beta-carotene and vitamins A and C are also present in the nutrients of carrots. Apart from this, 0.2% fat, 86% moisture, 0.9% protein, 1.1 minerals and 47 calories are found in 100 grams of carrot. Due to these properties, carrot keeps the brain healthy, purifies the blood and maintains the eyesight. 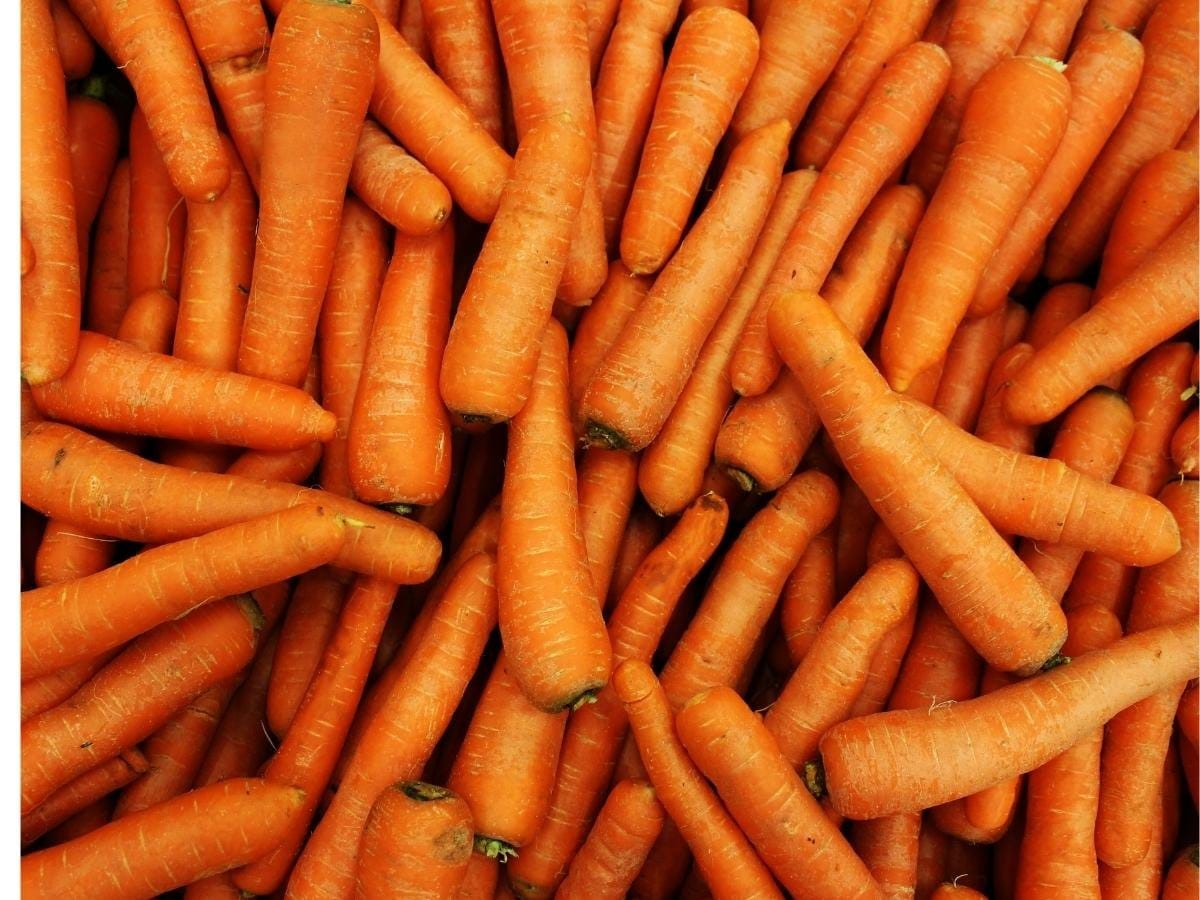 Carrot reduces pitta and vata in the blood, it also provides relief in piles, diarrhea and phlegm. (Image-Canva)

According to Ayurvedacharya and Yoga Guru Acharya Shri Balkrishna, carrot is used as a treatment for many diseases in Ayurveda. Because the fat in carrots is negligible, but the nutritional value is plentiful, due to which there is benefit in diseases like migraine, earache, bad breath, stomach ache. Carrot reduces pitta and vata in the blood, as well as provides relief in piles, diarrhea and phlegm.

Also read: Succulent, sour-sweet pineapple was once considered a ‘VIP’ fruit, interesting history of this fruit

Eating too much can cause burning in the stomach

According to dietician and Yogacharya Rama Gupta, drinking carrot juice is beneficial in blood disorders, lumps, swelling and skin diseases. If carrots are eaten with a lot of chewing, then the teeth and gums become healthy and shiny. Grate the carrot and eat it by adding rock salt to it, it provides relief from itching and itching. Adding salt, coriander leaves, roasted and ground cumin, black pepper, lemon juice to its juice keeps the digestive system fit. Carrot jam is beneficial for the brain in summer.
Eating more carrots can be harmful. The yellow part inside it is hot, which can cause burning in the stomach. It is high in fiber, so excessive consumption can cause stomach pain. Eating too many carrots can cause sleeplessness. Consuming too much carrot can cause sagging of the skin.