Big cardamom is used as a spice.

Black or big cardamom has been considered special in Ayurveda.

Swad Ka Safarnama: Black cardamom is also a wonderful spice. In appearance, it looks very rough and awkward, but it is a mine of qualities. It adds flavor to the food and keeps the body away from many diseases. It is considered a ‘panacea’ for the stomach. It is beneficial in any kind of stomach disorder. The special properties found in it take great care of the heart as well. Its origin is believed to be in the Sino-Indian region. The special thing is that the western world has been indifferent about this cardamom.

It is considered special in Ayurveda

Black cardamom, also known as black cardamom, is completely different from green and small cardamom in every respect. There is a lot of difference in the aroma, color and texture of black cardamom and green cardamom. The special thing is that both of them grow in different areas and the third thing is that big cardamom comes out from the root, while green cardamom is born from flowers like mango fruits. Large cardamom has been used for years, in India it is used as a spice for food. Ayurveda has also considered it special, so it is being used in China for years to cure stomach diseases. In ancient times, in Rome and Greece, its seeds were used to make perfumes. Black cardamom is one of the main ingredients in the garam masala made in India. Apart from this, this cardamom adds flavor to Mughlai dishes, especially Biryani and Korma etc.

Read this also: Journey of taste: Cabbage is used from vegetable to salad, it is very beneficial in eyes, bones, BP

originated thousands of years ago in the Himalayan region

There is no doubt about the origin of large cardamom. It is believed that thousands of years ago its origin started from the Himalayas to southern China. It flourished throughout the mountainous region from the Himalayas to southern China and eastern Nepal, India and Bhutan. In India, it is mainly grown in North Eastern states like Sikkim, Darjeeling and some areas of Uttarakhand. If we talk outside this region, black cardamom is also grown in some African regions. The special thing is that its presence is seen sporadically in western countries and markets. 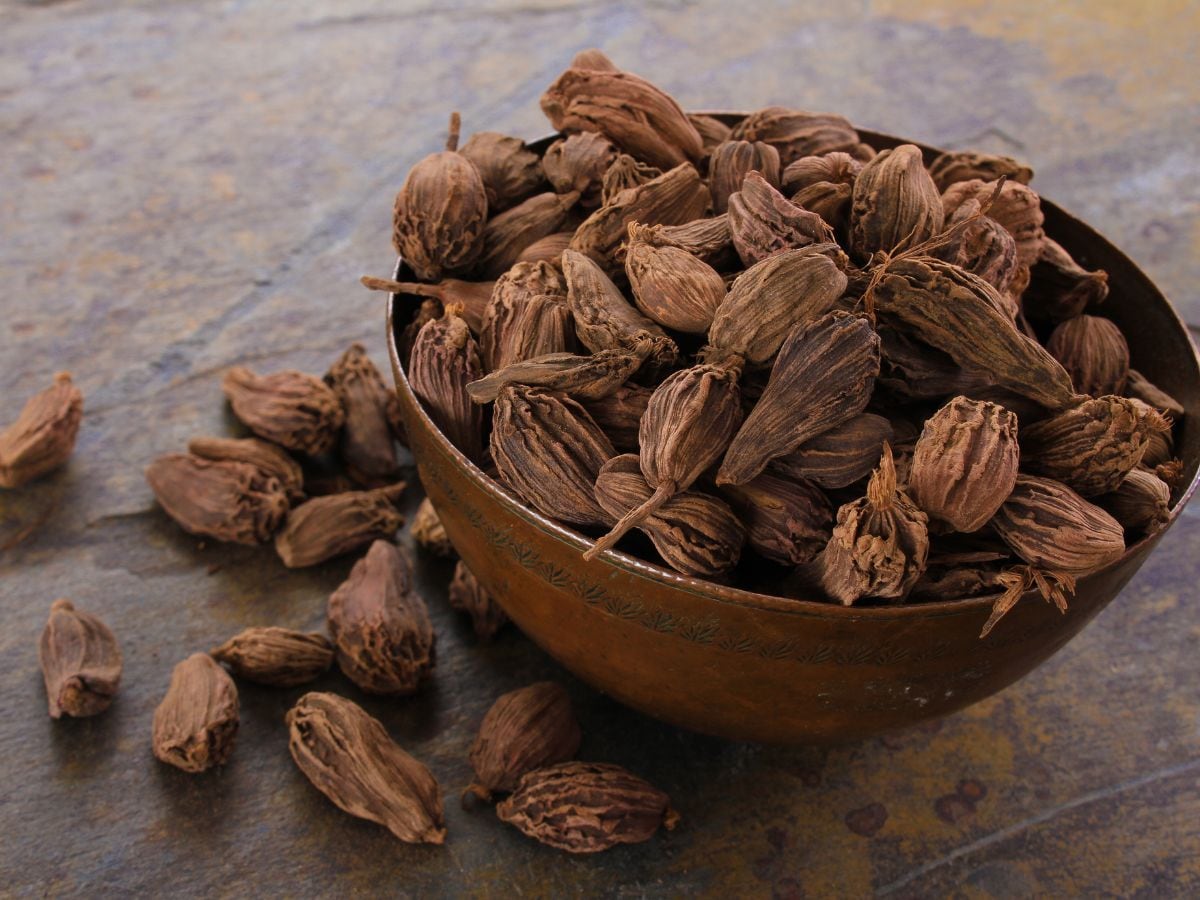 Big cardamom is used as a spice. Image-Canva

The taste is pungent but beneficial

Talking about the properties of big cardamom, it is considered very beneficial for the body. Jeevan Singh Pruthi, who has made international recognition in the field of spice technology and the founder director of India’s Agmark Lab, has informed in his book ‘Spcices and Condiments’ that Sikkim is the largest producer of large cardamom in India. They say that the taste of its seeds is pungent but good. Big cardamom gives strength to the heart and liver. It is very beneficial for the intestines. It induces sleep and also increases appetite. It is also beneficial in kidney stones and keeps teeth and gums healthy.

In the medical field it is also used for stimulant drugs and perfumes. Its oil reduces inflammation. On the other hand, according to well-known Ayurveda expert Acharya Balkishan, who has done extensive research on Indian herbs, fruits and vegetables, the truth is that large cardamom is also used medicinally. According to Ayurveda, large cardamom works to calm bile, induce sleep, create interest in food. It makes heart and liver healthy. Large cardamom increases appetite, digests food, removes bad breath. It eliminates stomach gas, stops vomiting, heals wounds. Urine comes freely by its use and fever subsides.

Its properties can save you from every stomach disease

Dr. Veena Sharma, head of the Ayurveda department of Bhagat Phool Singh University, Sonipat, Haryana, considers large cardamom to be magical. They say that it maintains the entire system of the stomach excellent. It also takes great care of the heart. With the help of its stimulant properties, it stimulates the gastric and intestinal glands to secrete essential juices. It also has the specialty that it regulates the process of secretion to keep the amount of stomach acid under control. Due to this, the chances of developing gastric ulcer or other digestive disorders are greatly reduced. The digestive properties of the substance are also very important in curing chronic constipation and improving appetite. Black cardamom also affects heart health to a great extent. It also has properties to control blood pressure. It can reduce the chances of blood clot formation. In this, many respiratory disorders like asthma, whooping cough, congestion in the lungs, bronchitis etc. can be treated.

Read this also: Journey of taste: Dragon fruit is full of foreign qualities, PM Narendra Modi has also praised it

Can also get rid of bad breath

He informed that infection of teeth and gums can be treated with black cardamom. Its strong smell can help in curing halitosis or bad breath. To maintain oral hygiene, you can gargle with warm water filled with black cardamom. Research suggests that black cardamom can have a positive effect on the detoxification process in the body. It also has antioxidant properties, due to which the muscles remain healthy and the hair is also nourished. It is such a spice that it cannot be consumed in excess. As soon as its excessive quantity reaches the mouth, the tongue will reject it. But consuming it in excess can cause heat in the body. There may also be a burning sensation in the stomach.