KBC’s first winner Harshvardhan Navate won one crore in 2000, what are you doing now?

What did the Narula brothers, who won 07 crores for the first time, do with this prize money?

Sushil Kumar of Bihar, who won prize money of 5 crores, has really become a pauper

Kaun Banega Crorepati started for the first time in the year 2000 in India. Since then, it has remained everyone’s favorite in the whole country. Along with those who play this game in TV, a large number of people also play it in their homes. It would often be curious how the lives of the winners who won the prize money of 01 crore, 05 crore and 07 crore in KBC would have changed. What are they doing now.

Megastar Amitabh Bachchan presents this show. His payoff itself adds to the show. He presents it in a very original way. At present, its 15th season is going on on TV. In between few years this show did not come on TV. But this is the only show whose popularity remains intact and it has really changed people’s lives.

Although most of the women in this show are usually the winners. The winners have come from every section of the country and society. Earlier, the person who answered the 15th question in this show used to get a reward of Rs 01 crore, but later this amount has increased to 05 crores, then to 07 crores and now to 07.5 crores. Questions have also increased a bit. This time 75 lakh rupees are given for correct answer on the 15th question, then 01 crore rupees on the 16th question and on the 17th and last question this amount increases to 7.5 crores.

This is Harshvardhan Navate, who achieved the feat of becoming the first Crorepati Winner in the first season of KBC. (file photo)

1. Harshvardhan Navate
Year 2000, KBC 01, Prize Money 01 Crore
For the first time, young Harshvardhan Navate won Rs 01 crore in the first season of KBC 22 years ago. Then this prize money was much more than today. Navate was then preparing for the civil services exam. He stopped preparing for civil services after becoming the winner. He went to England to do MBA. Returned from there and is now working in a big position in Mahindra & Mahindra. He married Marathi actress Sarika Navathe. The family consists of wife and two sons.

2. Brijesh Dubey
Year 2005, KBC 02, Prize Money 01 Crore
Kaun Banega Crorepati returned to the TV screen again after 5 years after the first season. In 2005, in season 02, Brijesh Dubey won Rs. 01 crore by answering all 15 questions correctly. Dubey, the son of a former national hockey umpire, is working as an electric engineer.

3. No Crorepati in KBC 3
In the year 2007, in season 03, none of the contestants got the credit of becoming a millionaire. This time Amitabh Bachchan was not hosting the program, instead Shahrukh Khan was brought in his place. Then this show was ended before its scheduled time.

4. Rahat Taslim
Year 2010, KBC 04, Prize Money Rs 01 Crore
The fourth season of KBC aired in 2010. Megastar Amitabh Bachchan returned to the show with full energy. In this season, the woman became the winner. His name was Rahat Taslim. Those who came from Jharkhand and used to make a living by sewing. She was a domestic lady but the way she answered the questions left the entire nation captivated.
From KBC, she opened a boutique in her city Giridih and now she is running her business very well. And she has really changed her life. However, behind this is his own hard work and dedication.

In the year 2011, Sushil Kumar of Bihar won 05 crores for the first time, many types of news kept coming about him. Recently in an interview, he said that his financial condition is also very good, but he is leading a happy life. (News18)

5. Sushil Kumar
Year 2011, KBC 05, Prize Money Rs 05 Crore
Sushil Kumar of Bihar became the winner of the 5th season of KBC. He won 05 crores. For the first time, he became the contestant to win such a huge prize money in this game show. He built his house with this money, bought land and invested money in the cab business. In between the news came that he has lost all his money but this is not right. His life has changed and is going well.
Sushil Kumar also helped the needy people a lot. He recently said in an interview that my condition is very good, I am living a happy life, I am also doing many good social work. Sushil Kumar does sapling or tree plantation everyday. So far, about 80 thousand saplings have been planted.

6. Manoj Kumar Raina and Sanmeet Kaur Sahni
Year 2012, KBC-6, Prize Money – 01 Crore and 05 Crore
There were two winners this season. Manoj Kumar Raina and Sunmeet Kaur Sahni. Sunmeet belonged to a household which was very conservative. She tried secretly for KBC with the help of her husband. He won 05 crores. At first he opened a fashion house, which did not work. Then started tiffin service. Now running coaching institute with great success.

On the other hand, Manoj Kumar Raina won the prize money of 01 crore. He made his house out of it. He also continues to do community service together.

7. Taj Mohammad Rangrez and Firoz Fatima
Year 2013, KBC 7, Prize Money 01 Crore
Two millionaire winners were found this season. Taj Mohammad Rangrez lives in Udaipur, Rajasthan. After the auction of the house and the death of his father, he had to struggle a lot for even two times of bread. He never gave up. After winning one crore rupees, he lives as simply as before. Sometimes we had to do labor and scrap work. Today he is a lecturer in a government school. Known for helping people. He also gives motivational speech.

Firoz Fatima, a resident of Saharanpur, Uttar Pradesh, was 22 years old when she won an amount of Rs 01 crore in prize money. Firoz Fatima is a Bachelor of Science. Fatima says that it was her wish that her sister should not leave her studies due to financial problems, so she did not continue her further studies. At the same time, according to this amount, his sole purpose of participating in Fatima KBC was to win such an amount so that he could repay the loan taken by his late father and pursue his further studies. The credit for the success of Kaun Banega Crorepati also goes to megastar Big B Amitabh Bachchan, who has made it different from any game show in his original style.(Photo Credits: Instagram: @sonytvofficial)

8. Narula Bhai
Year 2014, KBC 08, Prize Money Rs 07 Crore
In this season, 07 crores started being given as prize money in KBC. Two Narula brothers Achin and Sarthak from Delhi won an amount of Rs 07 crore in the pair. He runs his business and got his mother’s cancer treatment done with this amount.

9. Anamika Majumdar
Year 2017, Season 09, Prize Money – 01 Crore
Some new lifeline features started in this season of KBC. In this, Anamika Majumdar, who runs an NGO in Jamshedpur, won prize money of Rs 01 crore. Although she went to the question of 07 crores but was not convinced, so she quit the show by taking one crore rupees.
He invested some of this prize money in his NGO and some in his life. Anamika Majumdar adopted two villages of Jamshedpur block office, Chirudih and Dhoon. She wants to make more and more people literate by helping them. She herself is taking all the responsibility of studying. Anamika has also opened an insurance account for about 500 women of villages, whose premium she pays herself. Along with this, she teaches and writes to destitute children and tries to change their lives. 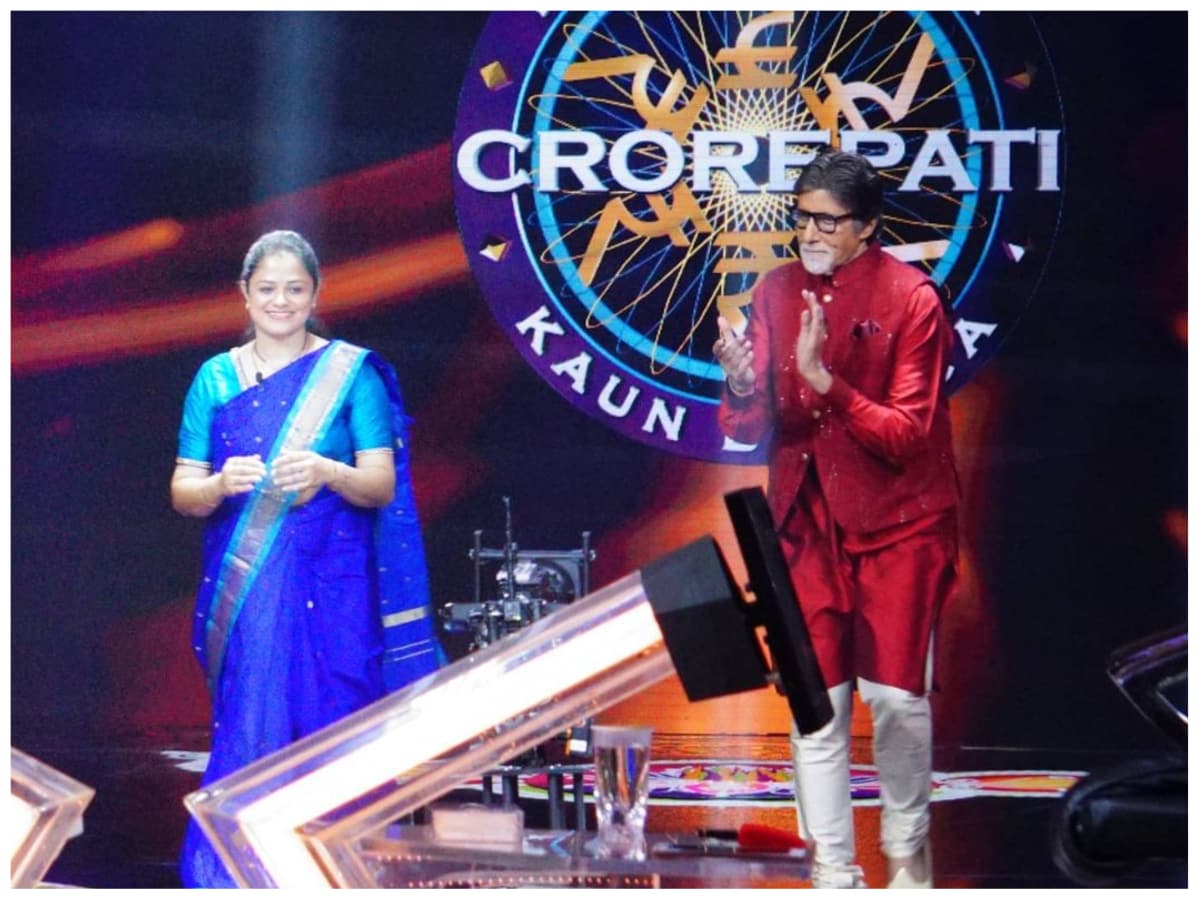 10. Vinita Jain
Year 2018, KBC 10, Prize Money Rs 01 Crore
Vinita Jain is from Assam. He opened a coaching institute after winning prize money of one crore from KBC. where she teaches herself. Also opened a dental clinic for his son. Her husband was kidnapped in Assam. Then he never returned.

11. Sanoj Raj, Babita Tade, Ajit Kumar
Year 2019, KBC 11, Prize Money Rs 01 Crore
In this season, KBC got five such winners who won one crore rupees. The most memorable story in this is of Babita Tade, who lives in Maharashtra. Who used to cook food in a village school. He had won an amount of one crore. Also, when she tried on the question of 07 crores, she hesitated and quit but her answer later turned out to be correct.
After this victory, Babita Tade was made its ambassador in Amravati for the SVEEP program of the Election Commission. Babita Tade was a simple lady from Anjangaon Surji village in Amravati district who worked as a midday cook in a government school, for which she used to get 1500 rupees per month from the government department. Maybe she still does that work, because she always loved this work.

12. Nazia Naseem, Anupama Das and Mohita Sharma
Year 2020, KBC Season 12, Prize Money – Rs 01 Crore
Nazia Naseem, a resident of Paras Toli, Doranda, Ranchi, won one crore rupees. Her in-laws house is in Bhilai, Chhattisgarh. When she won this prize money, she was working in Delhi. Currently, Nazia is working in a mining company in Australia.
The second winner of this season was IPS Mohita Sharma, who belonged to Himachal Pradesh. Mohita Sharma, a resident of Kangra, is posted in Jammu and Kashmir these days. Mohita Sharma is a 2017 batch IPS officer.
Anupa Das was a teacher in Chhattisgarh and is still doing teaching work. He won one crore rupees as prize money.

13 Himani Bundela
year 2021, kbc 13, prize money
Himani Bundela is from Agra. She is a mathematics teacher by profession. He answered all the questions well. She was not sure on the question of 07 crores, so she quit. At the age of 15, he lost his sight in an accident but even after that he never gave up.