Sprouted moong dal should be avoided by eating raw.

Swad Ka Safarnama: Moong dal khichdi made with flavorful moong dal and only salt has made deep inroads in the Indian psyche. The reason for this is that lentils filled with spices and juice of moong prepared by applying tadka add flavor to the food, then khichdi of this pulse infuses energy in the patient. This is such a pulse that neither produces heaviness in the body like other pulses nor does it bloat, hence it is considered extremely beneficial for the body. It protects the body from heat and keeps the heart healthy. Experts call this lentils miraculous. Moong, which originated in India, is being eaten all over the world today.

From sprouts and pudding, it also fills juice in broth

Moong dal is called mudga in Sanskrit, which literally means the giver of joy and happiness. In India, moong dal is considered to be the third important pulse crop after chickpea and tur. Among all the ancient Ayurvedic texts of the country, moong dal has been praised the most in the description of pulses. This dal khichdi and soup are also considered special and sprouted moong dal is also said to be very nutritious. This is such a lentil that it tastes great in gravy, so the cheela made from it fills the mouth with water. What to say about moong dal pakodas and moong dal halwa? That is, there are other uses of this miraculous pulse, which bring comfort to the stomach and mind. Animals also eat this lentil plant as fodder, so these plants are also used as manure.

It is said that the broth of this pulse was invented by the Mughal emperor’s son Murad. Image-Canva

The people of Moradabad in Uttar Pradesh are fans of this pulse. There the special thick broth (soup) of moong dal is very much liked. It is eaten as breakfast in the morning and evening. It is said that the broth of this pulse was invented by the Mughal emperor’s son Murad.

It is considered the best pulse in Ayurvedic texts.

Today there are waters of this pulse all over India. Not only is this a special dish in North India, in South India also many dishes including Vada are made. In Gujarat, pakodas, papads and khandvi made from this pulse have also made a different identity. The history of moong dal in the country is very ancient. Ever since agriculture has happened in India, moong dal is being grown since then. History books related to food tell that moong dal was first grown in India and its cultivation started in 2200 BC. There is a mention of dal khichdi in Buddhist literature and in Buddhist monasteries disciples were advised to drink boiled water of this pulse. In ancient times, the practice of making wine of this pulse was also prevalent.

In the Ayurvedic text ‘Charakasamhita’ written in the seventh-eighth century BC, moong has been described as the best pulse. The text says that this lentil is sweet, dry, semen-enhancer, besides phlegm-bile destroyer. In the book, khichdi and soup made of moong dal have been declared very powerful. In another Ayurvedic text ‘Sushrutasamhita’, moong dal has been considered as digestible and very useful in diseases.

Foreign botanists also consider it to be Indian pulse.

There are many other evidences that the first moong dal was born in India. American-Indian botanist Sushma Naithani has considered the origin center of moong dal as the Indo-Burma epicenter, which includes India and present-day Myanmar. He says that Afghanistan, Tajikistan and Uzbekistan also later became its centers of origin. On the other hand, Russian agricultural and botanist Nikolai Ivanovich Vavilov (1887–1943) believes that moong dal is native to India and Central Asia. It has been grown in these areas since prehistoric times. Apart from this, Swiss botanist De Candole also says that moong dal was first born in India. 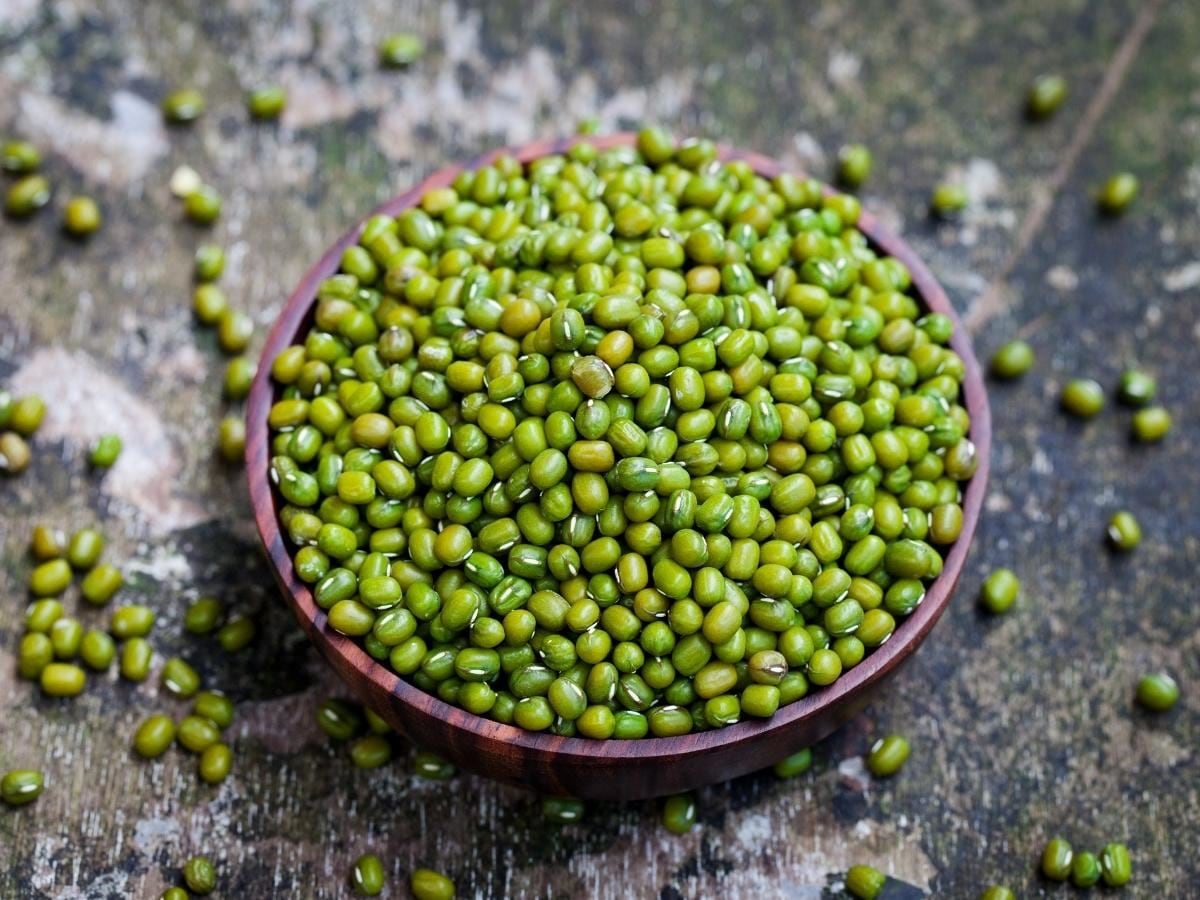 Today, the cultivation of moong dal is the main crop in the whole of South Asia, besides China, Myanmar, Thailand, Sri Lanka, Indonesia, Cambodia. Now it is being grown in some parts of Africa and America as well. Looking at the global scenario, 45 percent of moong dal is produced in India itself. In India it is grown in many states, but its crop is bumper in Andhra Pradesh, Orissa and Maharashtra.

Now talk about the properties and nutritional value of moong dal. According to the US Department of Agriculture (USDA), 180 kcal, protein 12 g, fat 0.5 g, carbohydrate 32 g, fiber 8.01 g, calcium 60.2 mg, iron 3.6 mg, besides vitamin C and other minerals are also found in 100 grams of lentils. . The miraculous quality in this is that moong does not produce gas in heavy and pat like other pulses. It is considered a mild pulse and it cools the heat of the body and maintains normal heart activities. According to food expert and home chef Simmi Babbar, if its sprouted lentils are eaten with light steam, then its nutrition and properties increase. It is antioxidant and gives instant energy, only then it is recommended to drink moong dal khichdi or soup when sick. In summer, its consumption is considered more beneficial.

Also read: Taste Ka Safarnama: In the Second World War, sweet potatoes were given to soldiers in food, there are many interesting things related to it

Simmi says that this lentil has a special ability to control bad cholesterol. Only then, with its regular consumption, obesity also stays away. It is extremely digestive, hence beneficial for the intestines as well. To keep the newborn healthy, it is recommended to consume this lentil soup with mother’s milk. It also does not increase sugar. Consumption of this pulse also gives energy to fight the bacteria in the body. This lentil also removes muscle tension and is also considered effective in inflammation. The elements that control pain are also found in this pulse. There are no side effects of eating moong dal. If it is eaten raw or undercooked then loose motion and vomiting may occur. Sprouted moong dal should be avoided by eating raw. Those whose digestive system is weak, problems can arise for them. Excessive consumption of this pulse is harmful.