Apple is such a fruit, in which 25 percent air is present.

Apples have been grown in Asia and Europe for thousands of years.

Apples reduce the risk of sugar, arthritis and cataracts.

There is a famous English proverb about sweet, juicy and fiber-rich apples that An Apple A Day Keeps The Doctor Away. That is, eat an apple every day, drive the doctor away. There is no exaggeration in this statement. Eating apples really reduces the risk of many diseases. Because it is not only digestive, it also gives less weight. It is also beneficial for the heart. Therefore, eating it can be healthy. It is believed that ever since man came to this earth, the existence of apple also stayed with him. The apple grown in the forests has now become a fruit beneficial for humans.

This miraculous fruit has affected the whole world!

Apple is amazing in terms of nutrients and other issues. It is such a fruit that contains 25 percent air, so most of the apples float. The apple releases ethylene gas, which causes it to ripen on its own, which will ripen other fruits as well. There is no such feature in any fruit. There is no specific explanation about apple in Hinduism or Puranas. But its specialty and name have affected the whole world. It is said that the fruit of the knowledge of good and evil that Adam and Eve ate was an apple. Well did they eat apple or fig? The debate on this continues even today. The ancient Greek scriptures depicted the apple as a symbol of beauty and love. Aphrodite, the goddess of love and beauty there, considered the apple sacred.

It is said that the existence of apple fruit has been present with the origin of man. (Image/Canva)

On the other hand, Sir Isaac Newton discovered the law of gravity only when an apple fell on his head. The whole world knows Steve Jobs today because his Apple gadgets changed the whole world. It is said that in the seventies, when Steve came to India to meet his mentor, his favorite fruit was Apple, which influenced Steve to make his product name and logo Apple.

Recording its presence since the Stone Age

The history of apple cannot be tied to any time. Research shows that this fruit came to earth along with humans. It is described in the Stone and Iron Age (about 10,000 to 8,500 BC), then it was a wild fruit. Botanists say that the apple first originated in the Central Asian country of Kazakhstan. From there it reached the rest of the world. But it is also true that this fruit has been grown in Asia and Europe for thousands of years. Indo-American botanist Sushma Naithani has considered four origins of apples. These include the Fertile Crescent (Israel, Jordan, Syria, Iraq etc.), Middle East Center (Iran, Turkmenistan), Central Asiatic Center (Kazakhstan, Uzbekistan, India) and China and South East Asia (China, Thailand, Vietnam, Korea). Huh.

One theory also states that carbonated remains of prehistoric apples have been found in a lake in Switzerland, while another claims that the wild apple originated in a chain of mountains called the Caucasus between the Caspian Sea and the Black Sea. By the way, it is clear that the spread of apples was done through the Silk Route which came out of Central Asian countries and also came to China, India.

Also read: Fenugreek seed is a ‘panacea’ in controlling sugar, know the interesting history of this spice rich in medicinal properties

There are 7500 varieties of apples all over the world

There is a brief description of Sinchitika (apple) in the ancient text ‘Charakasamhita’ of India. In its ‘fruits:’, apple is considered to be astringent-sweet, cool and edible. Today apple is being grown and eaten all over the world and there are about 7500 varieties of it. According to modern science, unpeeled medium sized apple contains 86% water, calories: 52, protein 0.3 grams, carbohydrate 13.8 grams, sugar 10.4 grams, fiber 2.4 grams, fat: 0.2 grams. These fruits are a good source of vitamin C, potassium, copper, manganese and tryptophan (a substance that regulates appetite, sleep and pain). Therefore, it reduces the risk of many diseases in the body. It fights cholesterol and reduces the risk of heart diseases. 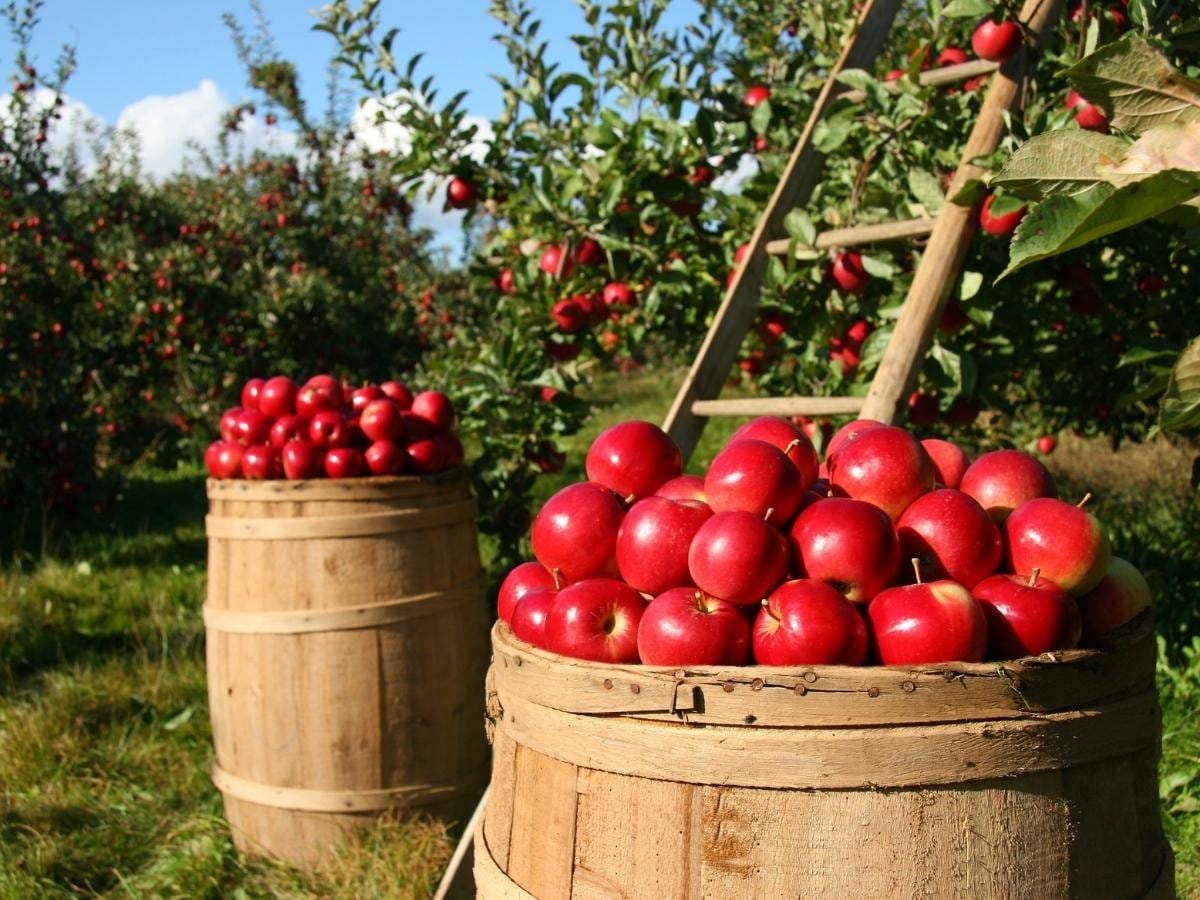 The properties of apple also reduce the risk of diseases like sugar, arthritis and cataract. (Image/Canva)

To stay young, eat an apple

According to well-known dietician Anita Lamba, since apples are rich in calories, fiber and carbohydrates, the stomach feels full. Due to this, the weight will be under control. The soluble fiber found in it keeps the digestive system strong and also keeps cholesterol levels under control. The elements found in it are also antioxidants, which help in fighting free radical damage. The properties of apple also reduce the risk of diseases like sugar, arthritis and cataract. It also brightens the skin. That is, most of the elements found in it are helpful in keeping the body young for a long time. If apple is eaten in excess then it can cause gas. People who have allergy problems, they should consult a doctor before eating apples.