Ratna Pathak Shah Controversy: Ratna Pathak Shah is counted among the well-known actresses of the entertainment world. Ratna has made her a special place due to her superb acting from theater to small and big screen. He has played many memorable roles in his career. Ratna, daughter of veteran Hindi cinema actress Dina Pathak, is one of those actresses who is known for living life in her own style beyond social rules and regulations. Whether there was live-in relationship with Naseeruddin Shah or marriage. The actress has always put forward a progressive outlook. Ratna’s husband veteran actor Naseeruddin Shah has been embroiled in controversies many times due to his outspoken statements, now his wife Ratna has also joined this list. It has become heavy for Ratna to make a statement regarding Karva Chauth.

Ratna Pathak Shah, who started her film career with Shyam Benegal’s film ‘Mandi’, has worked in many Hindi and English films as well as TV serials. During a recent interview, Ratna gave her opinion about the conservative thinking towards women around the world and all kinds of inequalities in the society. In a conversation with Pinkvilla, Ratna Pathak Shah said that ‘Our society is becoming very conservative, I am feeling it very strongly. We are becoming superstitious, we are being forced to believe that religion is an important part of our life.

Ratna Pathak Shah getting trolled on social media
Ratna Pathak Shah while talking about the social change in the society said, ‘Suddenly everyone is talking about it, are you not fasting on Karva Chauth? Till date no one has asked me this, last year someone asked me like this for the first time. I said ‘am I crazy? Isn’t it strange, modern educated women pray for the long life of their husbands, observe a fast on Karva Chauth. Ratna is getting trolled on social media because of her statement. Various types of questions are being asked to Ratna on Twitter. One asked why Ratna Pathak has put husband’s surname with his name, is this superstition, not conservative. Not only this, people are also criticizing him about his personal life. 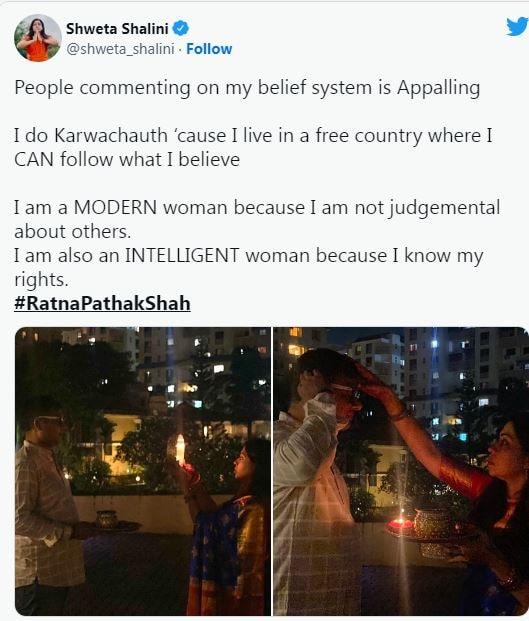 Naseeruddin Shah remains in controversy with his statement
Ratna Pathak Shah is in controversy due to her statement for the first time but her husband Naseeruddin Shah has an old relationship with controversies. Recently, after the remarks made by BJP leader Nupur Sharma on Prophet Mohammad, he said that he is not a fringe element but a BJP spokesperson. Such statements are given in Pakistan, Bangladesh. If PM Modi wants to stop the hatred spreading in the society, then he should come forward. The actor had questioned the Dharma Sansad held in Haridwar last year.

Naseeruddin Shah’s statement
Once Naseeruddin Shah was embroiled in controversies by praising the Mughals. The actor had said that ‘the Mughals contributed in promoting art like music, dance to the country. Historic buildings, monuments speak of the glory of the Mughal period. Apart from this, describing the ‘Love Jihad Act’ as a farce, he said that a campaign is being run, so that social contact between Hindus and Muslims can be stopped.

Naseeruddin Shah said that today’s India is scared
Naseeruddin once said that ‘I am afraid of today’s India. There is concern for the children. If someone asks whether Hindu or Muslim, my children will not have any answer, because we have not given religious education to our children. I am Muslim and my wife Hindu. Apart from this, on the issue of CAS-NRC, it was also said that ‘I do not have birth certificate, now from where should I get it. Does this mean we will all be fired? Doesn’t living here for 70 years prove me Indian? I am angry that such a law is being imposed on us.

The challenge being given to Ratna Shah
At present, not Naseeruddin Shah, but his wife Ratna Shah has come into controversy by questioning the text of Hinduism. On social media, he is being challenged to speak on issues like Islam, triple talaq, halala.